>Being the thirteenth in a series charting the writing of a new fantasy detective story. 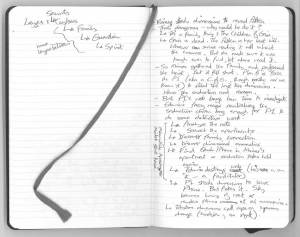 Having just written an exterior scene (in which our detective hero and Edwin trek across the flattened city landscape) I’ve decided to keep the action set entirely within the apartment building.

This was an idea I toyed with earlier, but rejected. Now I’ve changed my mind. Doesn’t affect what I’ve written too badly. The exterior scene can play out much as it did, just in a different location.

Also, after my last writing session I realised the plot I’d devised for this story was too complicated. So I’ve replotted. Gone is a trip to the Wildwood, mysteriously unaffected by the flattening. Instead, I’ve brought to prominence something I call The Pattern. The Pattern is the underlying structure of the cosmos, and something no man was meant to see. Just looking at it can kill you. Or send you crazy. Or something.

The Pattern is a phenomenon I’ve hinted at in a couple of my other stories. It’s also the subject of a novel I haven’t written yet (working title: Big Picture). I’ve decided this story is the place to introduce it as a concept.

As a tease, I’ve scanned the notebook I’ve just used to rework the plot. Just click on the image at the top of this post to view it. The right-hand page contains my scribbles about Flatland – good luck making sense of them!

Oh, and the scribbles on the left relate to another project altogether. About that, I’m saying nothing whatsoever …