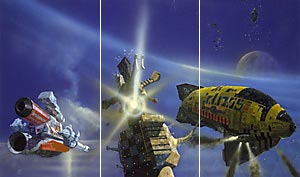 When I was a kid looking for my next spaceship fix, there was no better place to get it than the local bookshop. All those covers! A riot of hardware! It was glorious, all the more so because the bookshop was pretty much the only venue you could see such things. Yes, I’m talking pre-internet, those distant days before you could log on to the conceptships blog, when the ships you saw at the movies were made mostly from egg boxes and the games you played on your home computer loaded from a cassette tape. The bookshop was an art gallery and the admission was free.

Back then, Chris Foss was the man for me. His paintings were a dream come true. I still treasure my old copies of Asimov’s Foundation trilogy – you know, the Granada editions with the Foss covers that join up like a jigsaw. I vividly remember standing and gawping at them in WH Smith … and having no choice but to buy the damn books.

I tried to copy Foss’s style. I never got on with the airbrush but I did develop a kind of fine stippling technique that emulated his smooth blends – or so my young mind thought at the time. I made my spaceships asymmetrical, just like Chris’s. I laboriously painted on thousands of tiny windows. When I started writing my own stories about interstellar derring-do, it was Chris’s ships flying inside my head. Years later, when I read Consider Phlebas for the first time, I got the feeling Iain Banks had them buzzing around in his too.

Despite the nostalgic tone, I don’t want you thinking this is a piece bewailing the current state of SF cover design. Far from it. There’s never been more talent, variety and ingenuity on display than there is today (all right, and canny marketing too). Just browse the shelves – real or virtual – if you don’t believe me. I’m just pointing out where my roots lie.

In many ways, things are better now. I read somewhere that the trailers for Roger Corman movies always used to feature an exploding helicopter, regardless of whether the explosion appeared in the actual film. It used to be the same principle with SF covers and, yes, those old Foss-wrapped paperbacks were guilty as charged – if you read it, you’ll find Foundation has an awful lot of talking and not much in the way of big gaudy spaceships. I think SF cover design’s grown up a lot. These days you stand a better chance of the cover actually reflecting the content. But the good news is, the artwork still looks way cool.

Here’s three of my recent favourites. What are yours? 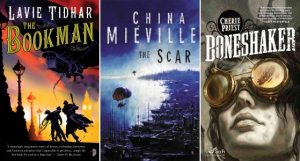