Okay, so it’s not exactly a reunion, but following my recent article about the movie adaptation of Dragoncharm, I’ve been in touch with some of the talented artists who worked on the project.

First up is Dave Bonneywell, who created concept designs for the various dragon characters. Dave’s got a long list of special make-up effects credits on movies including Event Horizon, Dog Soldiers, Hellboy II: The Golden Army, 28 Weeks Later and Clash of the Titans. You can see some of his amazing work on page at Deviantart – link below.

Second is Howard Swindell, who sculpted the three animatronic dragon heads featured in the Dragoncharm trailer. Howard went on to work as concept artist and/or sculptor on such movies as Star Wars Episode 1: The Phantom Menace, The Mummy, Harry Potter and X-Men: First Class. He has his own website full of fabulous visuals – link below. 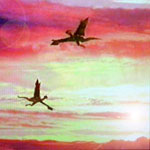 Last but not least is Rory Fellowes, responsible for developing the CG models and animation. Rory’s worked in both animation and visual effects on The Little Vampire, Harry Potter, Captain Scarlet and many others, as well as branching into music publishing. There’s a link below to his website, where you can see a showreel of some of his recent work.

If there’s anyone else out there who remembers working on Dragoncharm, let me know. I’d love to hear from you and add you to the list of alumni!