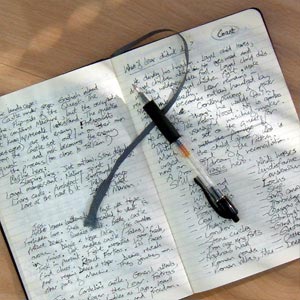 Writers never learn. That’s the conclusion I’ve come to. Well, this one never does. You’d think that after all these years I’d have honed my craft to the point where writing a novel is simply a matter of engaging the right gears in order to propel myself through the familiar process of plotting, drafting and revising, before I come out the other side with something that’s well-structured, dramatically satisfying and which someone might actually want to read.

The book I’m currently writing has caused me great pain. It’s had me blundering down blind alleys. It’s caused me to lie awake at night trying to claw my way out of a rattlesnake’s nest of plot problems. It’s even made me use curse words (never out loud, of course). The reason? Because I never learn. But you know what? That’s okay. Every story’s different. The first thing you should do when you open your writer’s toolbox is throw away the cookie cutter. Every story has its own voice. Sometimes you hear it right away. Other times, it just seems to bloody take forever.

On paper, getting this one down should have been straightforward. It’s the sequel to Talus and the Frozen King (which is due to be published by Solaris Books in 2014) and I’ve had the basic story plotted for over a year. Familiar ground then, with continuing characters and a number of developing story arcs. So why all the grief? Why have I ended up writing 20,000 words of the novel only to toss them aside? I think I’ve worked out the answer: I didn’t understand its spirit.

By spirit I mean two things. First is the core sentiment felt by the main characters as they move through the story – spirit in the sense of soul. Second is the bare-bones, concentrated form of the narrative – spirit in the sense of distillate. The two are intimately entwined. Sometimes when I’m planning a novel I get them right away. Other times they might only emerge as I write. Occasionally – as with this novel – I might think I’ve got them, only to find they evaporate at exactly the same rate at which I put the words down on the page.

That’s why I turned my back on this manuscript for so many weeks. Best to let it lie. Best to let my poor excuse for a brain do whatever distilling was necessary to turn a seething vat of unformed thoughts into pure liquor. That process – thank god – is over at last. I now hold in my cupped hands those precious few drops of spirit I need to get this damn book written. On this occasion, the spirit has taken the form of a simple statement about each of my two main characters. And here it is:

Those fourteen words might not look like much but, believe me, I’ve sweated blood to get them. The weird thing is this: that’s the whole book, right there. One hell of a spoiler, right? Each word is like one of those magic puzzle boxes, laced with meaning and possibility. My job now is to unfold those fourteen little boxes and turn them into something huge and unlikely.

Along the way, I might occasionally drink a little of another kind of spirit altogether. Just to help things along, you understand.