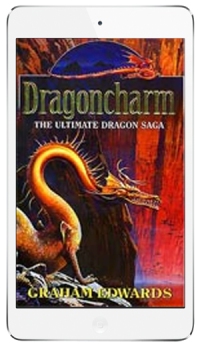 They say a picture speaks a thousand words. Maybe that’s why book covers – even ebook covers – provoke so much debate. It’s certainly why one of the big decisions about republishing my 1995 novel Dragoncharm is causing me such a headache.

The decision is, of course, what do I put on the cover?

The original UK paperback – the cover of which you can see pasted into the smartphone image opposite – was designed by the Voyager team at HarperCollins, and illustrated by Geoff Taylor. For various reasons (not least copyright law) it wouldn’t be appropriate to reuse it for my self-published ebook edition. So I need to come up with something new.

Since I have a day job as a graphic designer, this shouldn’t be a scary prospect. Except it is. When a project is as personal as this, it can be hard to get a decent perspective on what’s required. And to let go of all the baggage.

Part of that baggage is about how the Geoff Taylor cover came about in the first place. When I first signed up with Voyager, all those years ago, I was adamant that Dragoncharm didn’t fit the mould of all the other fantasy books that were around at the time. There are no swords, and very little sorcery. There are no kings or queens, and certainly no thrones for them to fight over. In fact, there are no people at all. Just dragons. The book owes far more to Watership Down than it does The Lord of the Rings.

For me, that’s a problem. Any book with the word dragon on the cover immediately attracts a certain kind of reader. I knew when I wrote the book that these may not be the people who want to read this kind of book. My publishers argued that they knew their readership, and thus a cover was born. It wasn’t what I wanted, but I understood why they’d chosen it (and yes, it was their choice – authors rarely get a say on what goes on the front of their books).

Despite my principles, I soon fell in love with the cover – who wouldn’t be bowled over by Geoff’s fabulous painting? But a question had been raised. And it was a question that lingered: “Just what is my target market?”

You know, after nearly twenty years, I’m still not sure.

My wife teases me about this. “Why don’t you write books that fit into just one category?” she says. She’s only half-serious – she knows as well as I do that genre-bending is one of the healthiest activities an author can pursue. Who wants to spend their literary life in a pigeonhole? But she also knows that the downside of this liberated attitude is that publishers struggle to define you, and bookseller struggle to shelve you.

I hit the same problem with my latest novel Talus and the Frozen King. It’s a neolithic murder mystery, set in an ancient world where everyone believes in magical spirits. Does that make it a crime novel? Specifically, is it historical crime? It’s a light read, so is it what they call “cosy” crime? Do the spiritual overtones and “alternate history” vibe make it fantasy? Who knows? I sure don’t. I only wrote the damn thing.

For better or worse, Talus and the Frozen King ended up with a fantasy cover. It’s a beautiful bit of design and illustration, and it owes a lot to the covers of one of my favourite authors: Robert Holdstock. It’s also a logical choice, given the proclivity of the fantasy readership for books set in prehistoric times. If it’s good enough for Jean Auel, it’s good enough for me. But is it right? I have no idea. As much as the cover attracts the fantasy audience, it could just as easily alienate the crime crowd.

That’s the tough part about cover design – you have to come down on one side of the fence. And the fence frequently has more than two sides.

So what does all that mean for the cover of the slowly evolving Dragoncharm ebook? Simply this: after years of allowing publishers to determine what goes on the front of my fiction, for the first time I get a chance to decide myself. Beyond that I’m, well, undecided. But it’s a creative challenge I’m looking forward to getting stuck into. Do I go for another representational illustration? Or should the cover be more stylised? Do I feature characters, environments, or both? Will it be intricate and filigreed with layers of detail? Or stark and bold? Do I ditch images altogether and go for a radical text-only solution? So many choices …

You can be sure of one thing. It will probably have a dragon on it somewhere.

I did have some input into the covers of the Stone trilogy – my second series of fantasy novels. The cover illustrations were done by the incomparable Les Edwards (no relation), but the initial concepts were mine. Here’s my sketch for the cover of Stone & Sky, set beside the finished article: