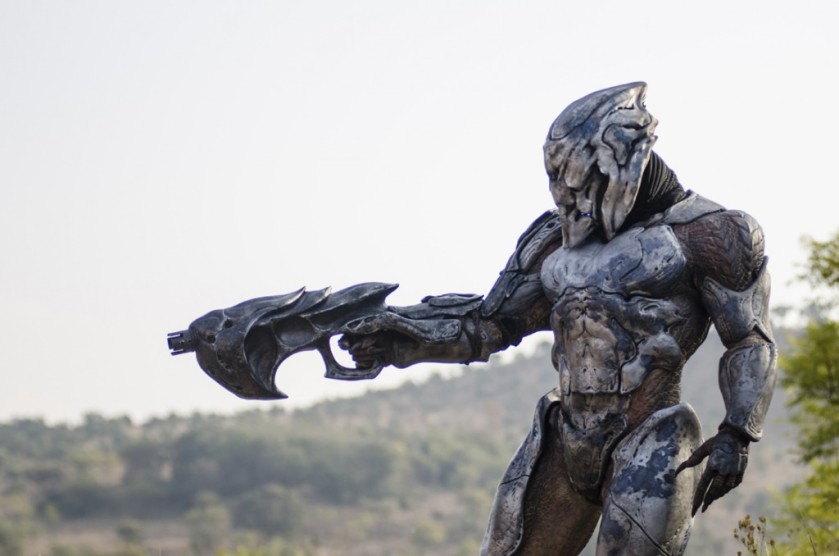 This month on the Cinefex blog, I interviewed filmmaker Jabbar Raisani about his feature directorial debut, the low-budget sci-fi thriller Alien Outpost.

Filmed in South Africa on a budget of under $5 million, the movie is a mock military documentary chronicling the fortunes of a squad of near-future soldiers as they mop up the planet after an alien invasion. In the article, Raisani talks about the genesis and production of the project, as well as revealing some of the secrets behind its special and visual effects – a cunning blend of digital artifice and traditional monster movie techniques.

In this extract from the article, Raisani describes how the design of the alien “Heavies” evolved:

Production designer Eddie Yang was responsible for the overall look of the film, from the run-down Outpost 37, around which much of the action is centred, to the alien Heavies and their associated technology. For the Heavies specifically, Yang worked hand-in-hand with Steve Wang, who led the Stan Winston Studio design team behind the iconic alien hunter in Predator.

Yang and Wang turned to a number of reference sources for the aliens, including video games and films, as well as nature. “We looked at a lot of reptilian photographs,” commented Raisani, “particularly turtles and lizards – they were a big inspiration for the Heavy.”

While the designers explored a number of radical body shapes, the final Heavy design was a more conventional, lizard-like biped. “We tried something with multiple legs,” said Raisani. “We even had one whose bottom part was a snake. But ultimately I knew I wanted a guy in a suit. I come from a practical effects background, so I know that doing it that way is very cost-effective in the places where you can get away with it. Also, if you have the suit there in the plate, it’s perfect lighting reference.”

Initial Heavy designs took the form of sketches in both 2D and 3D, with the designers working primarily in Photoshop and ZBrush. From there, the team at Alliance Studios – a creature and make-up effects company newly set up by Yang and Wang – sculpted the creature in clay and took moulds. “They pulled foam rubber suits from the mould, and then airbrushed them,” Raisani explained. “The suit had a self-actuating jaw, which attached directly to the jaw of the suit performer, Doug Tate. When Doug opened his mouth, the mouth opened; when he closed his mouth, it closed.”