When I was a kid, we had all the usual board games in the house. As a family we regularly played Monopoly and Cluedo, as well as more obscure games like Buccaneer (fight as a pirate on the high seas!), Masterpiece (bid in an auction for paintings by the Old Masters!) and Bermuda Triangle (will your magnetic ship be sucked into oblivion by the mysterious wandering cloud?).

Our games suffered from occupying the same house as me. Why? Because every time I played a game, I wanted to invent a new one. What better place to experiment than on the backs of all the game boards we already had? For a run of several years, it was impossible to prise any of our much-played games out of their dog-eared boxes without releasing a flurry of experimental paper graphics which I’d inadequately adhered to the reverse side. I remember inventing a space race game, an airline tycoon game, a bank heist game … you name it, I inflicted its half-baked rulebook and clumsily fabricated playing tokens on my long suffering family. None of those games has survived to the present day. It’s probably just as well.

My interest in games was rekindled in the 1990s, when as a graphic designer I made the historic move from sitting at an A0-sized drawing board (with parallel motion) to operating a Macintosh computer. During lunch breaks, I discovered the bewildering – and occasionally dazzling – world of early computer games. Most left me cold, but I did develop an unhealthy obsession with two.

The first was Bungie’s Marathon, one of the first 3D shoot-em-ups. I’m not really a fan of this sort of game, but Marathon – as well as being genuinely ahead of its time – benefited from a robust storyline of alien infiltration and rogue AIs, and a network play feature that allowed our small team of designers to annihilate each other on a regular basis. It also came with a map editor, which saw me spending as much time designing and creating 3D environments to play in as it did offing my colleagues.

The second game (and the superior one, for me at least) was Robyn and Rand Miller’s Myst. Also a groundbreaker, this was much more up my street – an atmospheric take-your-time adventure that involved making your way through a stunningly designed and rendered fantasy/sci-fi world, methodically solving an imaginative variety of logic puzzles, each of which helped you peel back the layers of a genuinely engrossing narrative.

Once I had kids of my own, games continued as part of the fabric of family life. At the forefront, inevitably, were console games like Guitar Hero, Wii Sports and Star Wars Battlefront. However, I no longer possess either the inclination or the hand-eye coordination to spend my precious leisure hours making a simulated character jump another chasm, or shoot another bad guy. Computer games – they’re all the same, right?

At least, that’s what I thought until earlier this year, when three recently-published iPad games reminded me why I sometimes like to play. 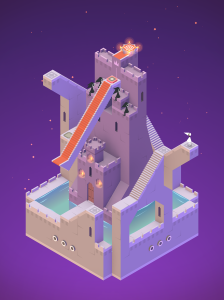 Monument Valley by Ustwo Games is, simply, the most enchanting game I’ve ever come across. Your task is to guide a little character called Princess Ida through a minimalist landsape that looks like a cross between an M.C. Escher print and a Hokusai painting. To open a path for Ida, you have to reconfigure a baffling array of interlocking architectural elements, often twisting them into seemingly impossible arrangements to create a structure resembling those kinds of optical illusions that make your head spin.

The interactive soundtrack lends the whole experience a calm, Zen-like air, while the cleverly-unfolding gameplay reveals not only ever more elaborate visual tricks, but also an underlying storyline that’s surprisingly affecting. I actually found myself emotionally engaged with the fate of a character that resembles four interconnected Lego blocks. And the “aha” moments when you finally figure out each new wrinkle are sublime.

Watch a video of the making of Monument Valley:

Lumino City by State of Play also requires you to guide a young female protagonist (this one’s called Lumi) through a surreal environment – in this case, a precariously balanced city built from cardboard. Yes, cardboard. Along the way, Lumi has to solve a number of puzzles such as activating water wheels, operating giant cameras and restoring power.

While this game proved a little twee for my taste, the puzzles are clever, the storyline is sweet, and the artistry is breathtaking. What makes it a winner for me is the technique by which the hand-built city has been brought to life … it really has been hand-built.

Here’s how it works – Lumi and the people she meets are simple 2D sprites. However, the environments through which they journey were constructed as a series of practical, miniature sets, using both handmade and laser cut components, and photographed using a motion-control camera. The result – a delicious combination of computer animation set against a background resembling stop-animation – is like nothing I’ve seen before.

Watch a video of the making of Lumino City:

My third choice is really three games in one. In Fireproof Games’s The Room, The Room 2, and The Room 3, your task is to open a series of intricate puzzle boxes, each of which is secured by a sequence of mechanisms designed to confound and infuriate. Each box takes you deeper into a Lovecraftian narrative which revolves around the search for a sinister fifth element known as “Null”.

The Room and its sequels are ingenious, spooky and addictive. They’re also difficult … and deeply rewarding when you make the final breakthrough allowing to open the next box. As the series progresses, the gameplay becomes more elaborate – whereas in the first game your viewpoint is confined always to the box on which you’re working, by the time the third game comes along you’re free to move between rooms, to the extent where it begins to resemble the great-granddaddy of all eerie puzzling adventures – the classic Myst.

So, shall we play a game?