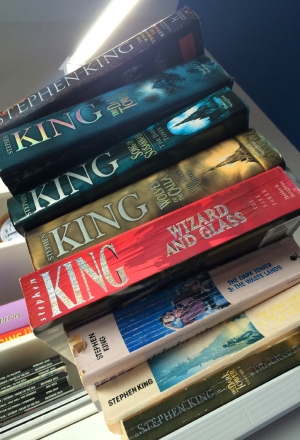 The movie adaptation of Stephen King’s The Dark Tower is finally happening. Sony Pictures is working towards a release date of February 17, 2017 for the first film in a projected multi-part series, with Nikolaj Arcel directing and Idris Elba starring as grizzled gunslinger Roland Deschain. As an uber-fan of King’s uber-work, I couldn’t be more excited.

My relationship with Roland and his ka-tet of loyal followers began in 1989, when I picked up a trade paperback edition of The Drawing of the Three, the second volume in what would ultimately become a seven-book series (eight, if you include the 2012 bolt-on novel The Wind Through the Keyhole).

I was instantly hooked by the crazy collision of concepts and genres, in a narrative that played out along a surreal and seemingly endless beach prowled by sharp-clawed monsters called “lobstrosities,” before jumping through Magritte-like floating doors into the 1970s New York mob scene, along the way embracing drug trafficking, mind control, the US civil rights movement, a psychopathic serial killer, and a boy who is both dead and alive, all driven by the relentless ticking clock of King’s insistent prose.

If all that sounds like a chef over-egging the pudding, you couldn’t be more wrong. The Drawing of the Three romps along in brisk and ballsy fashion, thanks in great part to a tight ensemble of characters who, once they get under your skin, won’t be crawling out in a hurry. That’s just as well, because you’ll be spending a lot of time of Jake Chambers, Eddie Dean, and the multi-faceted woman known initially as the Lady of Shadows, in subsequent volumes.

Yet no character is more haunting than the gunslinger himself, Roland Deschain. Think Clint Eastwood in Sergio Leone’s trilogy of spaghetti westerns, dusted with a healthy coating of Arthurian myth, and you’ll get somewhere close to appreciating the long shadow cast by this scarred, world-weary knight-errant. Trudging doggedly through the ruins of a world that has “moved on,” Roland seeks first the mysterious Man in Black, ultimately the Dark Tower, a legendary nexus of space and time where all worlds meet. The gunslinger, bound by his own sad, courageous, relentless and romantically brutal code of honour, is the glue that holds all the disparate jigsaw pieces of King’s ambitious opus together.

I could tell you more about the rest of the Dark Tower series. I could tell you about its nested narratives, by means of which King gradually fills in Roland’s youthful back-story. I could tell you about a riddling monorail train, animal-headed chimeras who suck out the minds of children, a giant cyborg bear, radioactive mutants, tense showdowns, love and loss, and somewhere at the end of it all, just possibly, redemption, where the gunslinger and his companions may finally get the chance to stand, and be true.

For today, however, I’ll constrain my comments to The Drawing of the Three. Why? Because, as the internet rumour-mills start powering up, like the slo-trans engines of King’s fantasy world, and as speculation grows about where the heck in this monumental narrative the screen story of The Dark Tower might begin, that second book is where my money is. The Drawing of the Three is where all the major characters first come together, mostly in extreme circumstances, and locked in combat. The story runs straight and clean, switching effortlessly between that never-ending beach and a series of escalating set-pieces in New York City.

And, yes, there are gunfights galore!