Most people are like cats – they live not just one life, but many. Writers are no exception. Here’s me as I plunge into my seventh writing life. 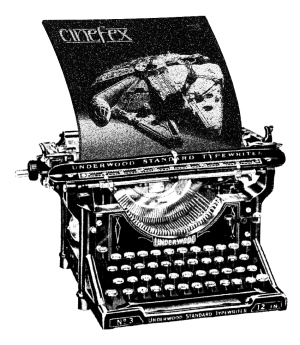 If you’re a regular visitor to this blog, you’ll know all about Cinefex. You’ll know that I’ve been reading the magazine since the early ‘80s, when I was a spotty teenager who divided his time more or less equally between haunting his local cinema and prowling the streets with a Super-8 camera making strange and occasionally disturbing short films.

You may also know that, around four years ago, I started writing blog articles reviewing the magazine’s early issues, in a series called Revisiting Cinefex. One thing led to another, and I ended up running a weekly blog for the magazine itself. I also wrote a full-length article that saw print in Cinefex 136, covering the visual effects of Rush, Ron Howard’s 2013 film chronicling the famous rivalry between F1 drivers Niki Lauda and James Hunt.

From now on, such articles are going to be my bread and butter, as I join the Cinefex editorial team to write full-time for the magazine.

Actually, this new job’s about more than just writing. Working on the VFX industry’s journal of record means I’ll be doing a ton of research, which includes conducting one-on-one interviews with key movie personnel. You see, Cinefex is the industry bible – according to Star Wars creator George Lucas, the magazine is “required reading for anyone interested in the new era of filmmaking.” Legendary filmmaker James Cameron has no hesitation in calling it “the one true source.”

“Wait a second,” I hear you cry. “I thought you wrote fiction.”

Yes, I do. And I’ll continue to do it just as I always have, after the day job’s done. The great news is that, from now on, the day job is all about writing too.

Anyway, I’ve come to believe that the perceived gap between fact and fiction is in reality paper-thin. While my new mantra will by necessity be “just the facts, ma’am”, there’s a lot more to research journalism than just crunching data. Good reporting means first getting to the heart of things, then discovering what makes that heart beat, and finally communicating the rhythm you hear to the reader.

In other words, it’s about telling the story.

And that’s what I intend to do.