My neolithic detective novel Talus and the Frozen King is set largely on the remote island of Creyak, in an icebound and unnamed land that bears a suspicious resemblance to the north-west coast of Scotland.

The model for Creyak is the neolithic village of Skara Brae, which was inhabited between 3,200 BC and 2,200 BC. My tale happens a little earlier than that, but it’s close enough for government work. Uncovered by a monumental storm in 1850, Skara Brae boasts a number of well-preserved stone houses. Regularly visited by tourists and researchers alike, it’s now regarded as one of the most important sites of its kind in the world. 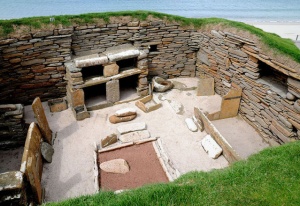 The dwellings on my fictional island of Creyak are similar to the houses of Skara Brae in many respects. Partly sunk into the ground, they’re connected by a maze of passages. Each has a central hearth, an imposing stone dresser and a storage pit in the floor. Nobody knows for certain what the Skara Brae roofs were made from; I’ve opted for whalebone rafters supporting a covering of turf. If you’ve read Talus and the Frozen King, you may have questioned where the whalebone came from, since nobody in Creyak seems particularly interested in hunting these monsters of the deep (I could tell you the answer to the conundrum, but I think I’ll save that tale for another day).

I’ve riffed on the Skara Brae theme with a few additions of my own, such as a wooden henge on top of the cliffs. This circle of standing wooden totems was erected by a mysterious earlier clan and has been eroded by the weather into fantastical forms. And no Neolithic settlement would be complete without a barrow or burial cairn. My cairn is spooky place with some curious acoustic properties. Take a drum in there and you can set up a standing wave of sound that divides the tomb’s stone interior into alternating bands of silence and cacophony – a great way to summon the spirits. Sounds fanciful? Don’t you believe it. It’s just one example of the extraordinary architectural skills possessed by our neolithic ancestors.

They might have lived in the stone age, but trust me – they were anything but primitive.