Some years ago, my novel Dragoncharm was optioned for movie production. I’ve mentioned it briefly on my blog here, but enough people have shown an interest to convince me it’s worth talking about at more length. Besides, it suits my current nostalgic mood.

Dragoncharm – a fantasy adventure novel with a cast made up exclusively of dragons – has been optioned twice to date. The first time, the rights were bought by a production company in New York. They were considering a TV adaptation using Muppet-style characters. I’m not aware of any serious work being done on the project during the twelve months they held the rights … and in hindsight I’m rather glad. Foam-rubber dragons were not what I had in mind when I wrote the book.

Second time round it was a UK outfit called Dandelion Distribution. Their concept was to adapt the novel as a thirteen-part TV series, which would also be condensed into a two-hour theatrical or (more likely) TV movie. The director attached to the project was Bob Keen, which immediately made the whole thing an exciting proposition.

Bob Keen made his name in make-up and animatronics. He worked with Stuart Freeborn on both The Empire Strikes Back and Return of the Jedi (he was part of the team behind Yoda and Jabba the Hutt). He’s perhaps better known for creating the effects in Clive Barker’s Hellraiser and its sequels. His company Image Animation operates out of Pinewood Studios and, at the time I met him, he was just beginning to establish himself as a film director in his own right.

Once we’d agreed the sale of the option, my publishers Voyager Books (in the delightful form of Jane Johnson and Cresta Norris) accompanied me to Pinewood, where we spent a happy afternoon talking the project over with Bob and his team. The Image Animation premises was a real Aladdin’s cave, complete with a full-size mannequin of Pinhead waiting to greet you at the top of the stairs.

Bob showed us all sorts of goodies – including an animatronic tongue they’d just built for a charming little Spanish film called Killer Tongue – but the thing that sticks in my mind is the Hellraiser folding box. Actually, it was lots of boxes, all of different sizes, each one designed to collapse or spring out in a particular way for various cuts in the movie. The workings looked like random jumbles of bent wires and elastic bands – real low-tech movie magic!

Bob explained that his idea for Dragoncharm was to put animated dragons into live-action environments. The environments would be a combination of real-world footage and model sets. The character close-ups would be achieved using animatronic dragon puppets, while the wider shots – walking and flying scenes – would be done with CG.

Bob’s a big bear of a man, immensely likeable, and his obvious enthusiasm for the project was infectious. He showed us some early concept art and talked about his various concerns about designing dragon characters. For example, they’d need to have relatively short snouts, otherwise mouth articulation for lip-sync would be a nightmare. The design work, I believe, was undertaken by David Bonneywell. We talked about ways to distinguish between the two races of dragons in the book: the charmed dragons have colourful metallic scales, while the natural dragons are dull and earthy. We also talked about voice performances, and how we might use regional accents to differentiate some of the characters.

Then Bob showed us the sample footage he’d put together. It was a four-minute trailer – a proof-of-concept really – featuring the three animatronic heads they’d built, married with CG animation by Rory Fellowes. The first scene shows CG dragons flying over and around a waterfall, before fleeing fireballs raining from the sky. There’s a cut to the hero animatronic puppets of Fortune and Cumber escaping into a whirlpool, followed by a gentler scene with the puppets on a beach at night, in which Cumber breathes fire and introduces Fortune to the pleasures of cooked food.

We then see bad guy Wraith – another animatronic head – speaking threatening dialogue through a sheet of fire. This is followed by more CG dragons, this time flying through underground caverns, before the trailer wraps up with a CG Fortune trying to outrun what looks like an exploding sun.

I could see the potential in the trailer – and the animatronic heads looked great. A bit Muppety round the mouths, maybe. The CG was of variable quality, but with some nice touches (a dragon scratching its back leg in mid-flight, for instance). It represented Image Animation’s first baby steps with what was, for them, new technology. And, to put it in context, all this was happening back in the mid-nineties. Jurassic Park had only just been released, and it was a huge leap from the mere six minutes of CG in that movie to the scale and level of animation we were talking about for Dragoncharm.

Crucially for me as an author, Bob had a good handle on the story. He understood it was full of emotion as well as action, and that the characters were the key. And, like me, he was passionate about making the dragons real.

In a later meeting, I visited Bob and his wife Sheila at their home (Sheila was writing the screenplay). We talked more about the story and Bob showed me a load of reference video. I nearly fell off my chair when I saw the reel he’d put together on backgrounds and environments – a lot of it was from Godfrey Reggio’s Koyaanisqatsi, all those grand aerial shots of the American West, which was exactly what had been in my head when I’d been writing the book. We were clearly on the same page.

Bob’s touchstone for the CG was Jeunet and Caro’s The City of Lost Children, which had just been released. He showed me a sequence with a computer-generated flea which had got him excited not only because it looked great, but because it hadn’t taken a Cray supercomputer to render the damn thing. He was looking at using SoftImage running on high-end PCs – a similar set-up, I think, to the one Pitof used in City. The bottom line was the kit had suddenly got cheaper both to buy and run, and Bob was confident he could get the work done within a reasonable budget. 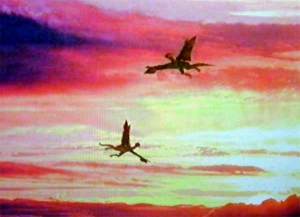 So where did it all go wrong? The short answer is there’s no one reason. These things happen. A lot of books get optioned but very few make it on to the screen. And, even after the green light’s lit, films can still end up in production hell. I suspect Dragoncharm was just too ambitious. A high-action fantasy adventure featuring large numbers of photo-real dragon characters? Dream on! The technology’s matured enough to make it achievable now – given a healthy budget of course. Back then it was probably madness to even contemplate it. But madness of the very best kind.

7 thoughts on “When Dragoncharm went to Hollywood (almost)”