The front cover of Cinefex #18 is a real sizzler, showing as it does one of the hapless victims of the ruthless Thuggee cult descending into a lake of fiery lava. The image is one of the many impressive models created by Dennis Muren’s team at Industrial Light and Magic for Steven Spielberg’s Indiana Jones and the Temple of Doom. A second ILM crew, supervised by Ken Ralston, was responsible for the image on the back cover: a glorious shot of the USS Enterprise approaching Earth’s orbital spacedock from Leonard Nimoy’s Star Trek III: The Search for Spock. Both of these 1984 films are discussed in depth over this issue’s 68 pages.

Where do you go after Star Wars? That was the question being asked by the staff at Industrial Light and Magic after they’d finished running the marathon that was Return of the Jedi. According to ILM production supervisor Warren Franklin, ‘Everybody was real down after [Jedi], wondering, “What will we do next to top that?”‘ The answer was to pull off the remarkable feat of handling two major blockbusters simultaneously.

Indiana Jones and the Temple of Doom

The first of these was Indiana Jones and the Temple of Doom, the less acclaimed but still phenomenally successful sequel to Spielberg’s runaway 1981 hit Raiders of the Lost Ark. In Franklin’s view, Temple of Doom was ‘a real step forward for [ILM]. It was not as much work [as Jedi] … but there was more diversity.’

After a brief overview of the film’s development, Everett’s article gets into the meat of how ILM tackled its opening sequences including Indy’s Trimotor flight over Asia and the high speed road chase through Shanghai. The road chase is interesting in that it was shot with the principals in a car on the ILM stage – no high-tech effects, just an old-school live action shoot using what Dennis Muren describes as ‘lots of smoke and flashing lights.’

The Trimotor aircraft scenes, in contrast, were all bluescreens, miniatures and wire-work, with Dream Quest stepping in when deadlines got tight to complete the shot where the plane flies over the Great Wall of China. In this section of the article we learn that coal is great for building scale models of mountains, and share the optical crew’s delight in managing to incorporate a natural depth of field into the bluescreen cockpit shots (Indy blurred in the foreground, cockpit window and sky sharp in the background). Camera operator John Ellis concedes this latter was tricky, but applauds it as part of Muren’s and Spielberg’s ongoing mission to ‘do away with the conventions that everyone knows don’t look right but are generally accepted.’

The matte painting team gets good coverage throughout. Supervisor/artist Mike Pangrazio tells us how the stunning sunset shot of the maharajah’s palace was created by photographing a foam core silhouette propped on a Marin County hilltop and painting over the results – ‘The painting itself looked ridiculously bad – just brush strokes that end in a black sky,’ he says. ‘But on film, I think it’s one of the best things I’ve done.’

The bit that everyone remembers from Temple of Doom is the mine car chase. Muren has nothing but praise for the live action footage Spielberg managed to squeeze out of the full-size mine shaft set, but doesn’t hold back when listing the challenges facing ILM when it came to matching its qualities in miniature. The biggest problem was that, in order to get sufficiently long runs of track, they were going to have to build their miniature caverns relatively small. Too small, in fact, for a motion picture camera to fit inside. A radical solution was needed.

The left-field answer was to re-engineer a Nikon still camera. Everett’s article describes in detail the extraordinary modification process which resulted in ‘a VistaVision format motion picture camera almost literally small enough to fit in the palm of your hand.’

The scale might have been small, but the miniatures were still enormous. The article devotes a lot of space to their creation, and the various tricks the ILM team came up with: rock walls made of tin-foil, hand-blown miniature light bulbs to create scale, using Rosco smoke to create aerial haze … and so on. As someone who, as a kid, had a bedroom full of plastic kits and model railways, I can take any amount of this stuff, but if models aren’t your bag you’ll find plenty to interest you in some of the corollary discussions, such as the various psychological cues that were incorporated into the footage to evoke a true sense of speed and scale.

If you like anecdotes there are plenty, including a cute story about an experimental lava effect using vanilla pudding that proved to be ‘a major attraction for the studio’s relevant mouse population.’ ILM displays something of a rodent obsession, actually, given modelshop supervisor Lorne Peterson’s (none-too-serious) suggestion that they introduce virtual vermin to the miniature mine tunnels by ‘dressing cockroaches up in little mouse costumes.’

In short, the huge diversity of the Temple of Doom effects load is all here for you to explore. But, despite the diversity, there is still a unifying force. Whether flooding miniature tunnels, animating puppets in back-breaking sets or filming baby alligators in milky water for later superimposition into a real-world river, the objective was always the same: seamless integration with the live action. From ILM’s point of view, this was greatly facilitated by having Michael Kahn’s primary editorial team just next door, cutting daily and conferring when shots didn’t work. Effects editor Howard Stein found this challenging: ‘It was unusual editorial work … Everything had to cut in with the live-action … That makes things a great deal more critical for us.’

Difficult as Stein and the others might have found this way of working – a routine more akin to a live-action production shoot than a more traditional VFX workflow – you only have to look at the finished sequences to appreciate the efforts they put in. The showcase chase through the mines is remarkable not only because it works dramatically and looks terrific, but because the effects shots are cut so seamlessly with the live action … over and over and over again. I can forgive the movie all its faults (and it has many) for that one sequence.

While Temple of Doom allowed ILM to ‘keep it in the family’ by working cheek by jowl with their Lucasfilm colleagues in Marin County, Star Trek III was an altogether more strung-out affair, with 700 miles separating ILM and the Paramount production team in LA. Although effects supervisor Ken Ralson describes the live-action crew as ‘real helpful’, he still admits that the constant commuting meant that ‘I’d forget what city I was in sometimes … My mind was going.’

Not that all the live action was shot in LA. Like Indy’s Shanghai car chase, a few incidental scenes were shot on the ILM stage, including the space dock cafe interior, which made use of the facility’s giant bluescreen. On this occasion, it was director Leonard Nimoy who crossed the 700 miles to make the gig.

All those flights clearly gave Ralston time to think. It was his idea for Klingon commander Kruge to have a pet – a creature he describes as ‘a very mean looking reptilian dog.’ Munson’s article reveals that it’s actually Ralston’s arm inside the puppet, which he had to operate while squashed in underneath Kruge’s chair. ‘There wasn’t much room,’ he admits. ‘Where does your head go? Up a Klingon’s … anyway, it was a tight fit.’

The rest of the crew faced challenges too. The lengthy space dock sequences were ‘difficult and labor-intensive’. Even after artistic issues had been resolved (such as taking the decision to add aerial perspective to the space dock interiors using smoke, even though logically there’s no atmosphere in outer space), there was the thorny problem of match-moving the spacecraft models to the space dock interior. ‘We had to plot each shot out on the Moviola,’ says effects cameraman Scott Farrar. ‘There’s no secret to that; it just takes a long time.’

Then there was the whole business of screen time. ‘They’re exceedingly long shots,’ says Ralston, pointing out that in the Star Wars galaxy shots rarely last longer than 100 frames. Some shots in Star Trek III linger on the screen for 400-500 frames. ‘I’m clawing at the arms of my seat,’ he says, ‘saying, “It’s too long!”‘

As with Temple of Doom, ILM’s versatility is apparent. As well as bringing Kruge’s dog to life, the creature shop also made a whole genus of squirming worms. Animation and optical revisited the classic Star Trek transporter effects and came up with a new Klingon decloaking effect for the film’s opening. The modelmakers and pyrotechnics team destroyed a planet. And, in yet another Indy echo, the stop-motion experts sent the movie’s villain spinning to his death down a sheer cliff face.

The one thing Ken Ralston really enjoyed, however, was blowing up the Enterprise.

”I’ve always said I hated that ship,’ Ralston says at the beginning of the article. ‘I tell you it was wonderful: Boom! Goodbye!’ Sure enough, Munson’s text tells us exactly how they did it: an elaborate combination of effects involving steel wool, acetone and explosives. Lots of explosives.

Summarising the whole Star Trek experience. Ralston has only good things to say. ‘It wasn’t a real tough situation with everyone on each other’s nerves,’ he comments. ‘There was a good sense of everybody putting a lot into it because they felt they were contributing more.’ These remarks from Ralston mirror closely those from Warren Franklin after Temple of Doom. According to Franklin, on the latter film Dennis Muren and Steven Spielberg ‘were open to each other’s ideas, and it made for a very happy working relationship.’ Creative collaboration, then, is the theme of this particular issue of Cinefex, whether as a result of long-standing relationships, the closeness of the Lucasfilm community or the readiness of Paramount to bring their effects facility into the fold, despite the miles. Return of the Jedi, far from burning out the ILM crews, seems to have left them feeling pretty damn good.

My favourite picture from the Temple of Doom article is on page 27 – a black-and-white shot of the Nikon camera perched on its little mine car, on a set of tiny railroad tracks, surrounded by a tunnel miniature whose walls are clearly no thicker than baking foil. It’s a humble little picture, but somehow iconic. From the Star Trek III article, I like the photo of Tom St Amand animating the Kruge puppet on its bluescreen armature. Kruge is upside-down and you can almost hear him growling at St Amand to let him go, or there’ll be trouble! 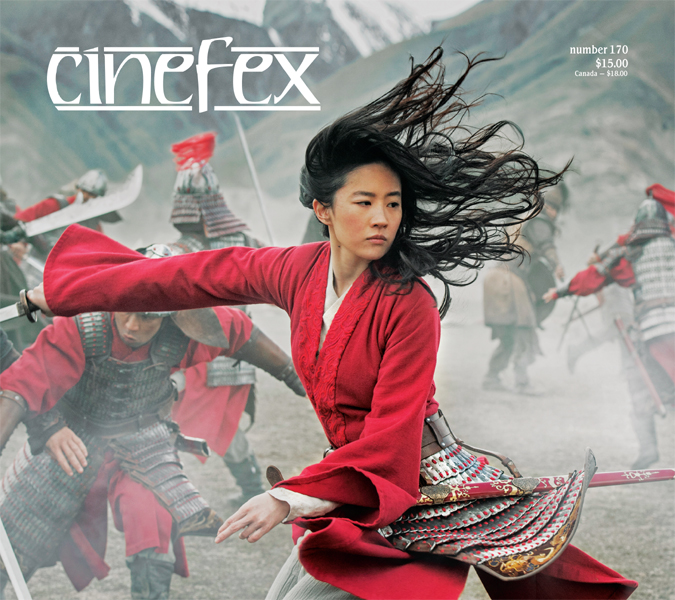