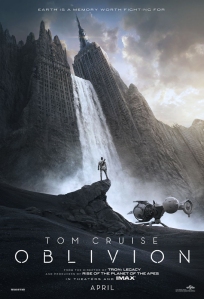 It’s refreshing to see a science fiction film that’s not a sequel, reboot or mindless action flick. Oblivion may be partially constructed from bits of other movies – not least Moon and Independence Day – but ultimately it rises above all that and becomes its own beast. For every few twists I managed to second-guess, the script delivered one I didn’t see coming, and ultimately took me somewhere I hadn’t expected to go. My son and I left the cinema deep in debate over its merits and faults, which is always a good sign.

Oblivion is a post-apocalypse tale centred on Tom Cruise’s character Jack Harper, a guy left behind to caretake Earth after an alien invasion and a mass exodus of the planetary population. The role fits Cruise well enough – and director Joseph Kosinski is undoubtedly right when he says, ‘I knew, given that it was an original science-fiction film with no recognizable brand, that I would need a movie star*’ – but I’d like to have seen a more character-driven performance. Likewise, Olga Kurylenko as Julia never really sparkles. Andrea Riseborough, on the other hand, is excellent as the crisp and fragile Victoria. As for  Morgan Freeman in his cameo as Beech, well, I could watch that dude forever.

In interviews, Kosinski (whose only previous film is TRON: Legacy) has cited 1970s sci-fi films like Silent Running and The Omega Man as his inspiration and I’ll buy that. After a well-crafted opening, the pace is stately and, while there’s plenty of action, it doesn’t take the lead. Darren Gilford’s intelligent production design ensures the ‘ravaged Earth’ environments look both tragic and lyrical, with a real sense of nature reclaiming her own.

Set against the global decay are Jack’s deeply cool  Bubbleship and the autonomous Drones that roam the landscape, protecting giant fusion reactors against raids from the surviving alien Scavengers. The classy visual effects from Digital Domain, Pixomondo and Gentle Giant bring these shiny vehicles to life and transform the dramatic Iceland locations (seems like everyone’s shooting sci-fi in Iceland these days) into epic vistas. While Oblivion sits firmly in the ‘everything in the future is desaturated and overlit’ camp of art direction, it really does look terrific.

My experience of watching Oblivion was undoubtedly boosted by the the fact I saw it on an IMAX screen. It’s the first film shot using the new Sony CineAlta F65 camera – a 4K camera with an 8K chip – and the picture quality was magnificent. Likewise the soundtrack, featuring a thumping score by French electro-band M83 and a great vocabulary of buzzes and beeps from the iconic Drones, kept me pressed firmly back in my seat. This is definitely one for the biggest screen you can find.

Hollywood still has a long way to go before it shakes off the idea that science fiction is all about action and cool hardware. But, hey, I like a shiny spaceship as much as the next guy, and Oblivion is certainly a step in the right direction. Given this is only his second film, I’d say Joseph Kosinski is one to watch.

One thought on “Oblivion”