You need a pair of big name stars to put on the front cover of Cinefex #40. Who you gonna call? Why, Dan Aykroyd and Bill Murray, of course, garbed as Ghostbusters and waving their nutrona wands in an image from Ivan Reitman’s 1989 sequel Ghostbusters II. The supernatural vibe extends to the back cover, which features the ghost of executed criminal Nunzio Scoleri, realised as a full-body suit with a complex animatronic head whose facial expressions were run by a computerised system called SNARK. The second article looks at Steven Spielberg’s Indiana Jones and the Last Crusade, also from 1989. Will this issue’s 68 pages leave us feeling haunted, or do they contain the Holy Grail? Let’s find out.

How fitting that this, the final retrospective in my Revisiting Cinefex series, should be concerned with a pair of films that themselves return to old ground. Heck, the first article in this fortieth issue is even called Ghostbusters Revisited. How spooky is that?

Cinefex was already going strong when these two franchises first hit the screens, reporting on Raiders of the Lost Ark in 1981 (issue #6) and on Ghostbusters and Indiana Jones and the Temple of Doom in 1984 (issues #17 and #18 respectively). So we’re perfectly placed to ask the question: ‘Did visual effects techniques change significantly in the years between the original movies and their sequels?’ If we’re lucky, Cinefex might just help us dig up the answer.

It’s ILM visual effects supervisor Dennis Muren who sets the scene for this backstage look at Ghostbusters II. ‘The first Ghostbusters set the trend for short production and postproduction schedules,’ he says, ‘and this one was worse. Ghostbusters II had by far the shortest schedule of any film I have ever worked on.’ 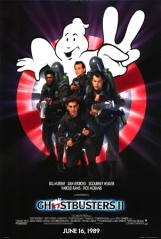 This is a well-rounded article, with the customary Cinefex ultra-detail supplemented by Dan Aykroyd’s insights into the development of the script, recollections from all the actors of filming in New York City and executive producer Michael Gross’s overview of the whole effects process.

It seems Gross spent a lot more time at ILM than director Ivan Reitman. ‘[ILM] asked what Ivan was like to work with,’ he says. ‘”Well,” I said, “… you’re hardly going to see him.”‘ What a contrast to some of the hands-on directors who have appeared in some other editions of Cinefex we’ve revisited. ‘Michael Gross has a very good eye for performance,’ says creature and makeup effects designer Tim Lawrence. ‘He was always on set.’ Still, Gross asserts that the relationship between the director and ILM was excellent: ‘The communication between Ivan and Dennis was so good that it didn’t matter.’

The comedic, improvisational nature of Ghostbusters II presented ILM with some serious challenges, as did a release date that kept shifting to earlier and earlier in the calendar. In the end the pressure proved too much. ‘We peaked out at a hundred and eighty shots,’ says Dennis Muren, ‘and we could not take on any more without jeopardising the whole film.’ Overflow work went to Available Light, VCE and Apogee.

Turning to the visual effects, yet again we sense the drive of the VFX professional constantly to create something new. ‘What I wanted to do with the film,’ says Muren, ‘was to try and create ghosts that nobody had ever seen before.’ Muren and his team tapped every technique they knew and developed more beside, creating a ghost nanny through a combination of live performance and puppetry, bringing the Statue of Liberty to life, turning the animated nutrona beams into lassos and projecting footage of the flying Scoleri brothers on to mirrorplex while manipulating the flexible material with motion-controlled push rods to ‘make them go round curves, stretch out at certain points and even bulge.’

There are some entertaining anecdotes, both from the production shoot (Harold Ramis likens cramming himself and his fellow actors into a cramped and freezing manhole on a New York street as ‘being trapped in a mine cave-in or the Armenian earthquake’) and from the effects stage (when the gimbal used to move the full-scale Statue of Libery head wasn’t falling apart, it was pitching enough to make the actors feel seasick: ‘It was a little scary,’ remarks Bill Murray).

And there was slime. Lots of slime. There’s even a complete recipe for slime from physical effects supervisor Chuck Gaspar. ‘You could actually eat the stuff,’ he says. ‘It would not have any taste, but you could eat it.’

When it comes our quest to unearth key visual effects trends of the 1980s, Eisenberg’s article does indeed bring forth some buried treasure. For example:

Muren closes the article in typically thoughtful fashion. ‘A movie like Ghostbusters II is not about effects,’ he says, ‘it’s about making people laugh.’ Reflecting on the tight deadlines, he adds, ‘I believe the slogan, “It isn’t over ’til it’s over’ … Just because we haven’t figured out something doesn’t mean that with two more minutes of thought we’re not going to come up with some great solution.’

Gross certainly seems pleased with the solutions Muren and his extended team provided. ‘We never had to sacrifice quality,’ he concludes. ‘It was a great team effort by a lot of people – and everybody delivered.’

Indiana Jones and the Last Crusade

There’s more than one way to skin a cat, and more than one way to discuss a film. In his article on the third Indy adventure, Adam Eisenberg takes the direct route of summarising the storyline sequence by sequence, breaking in to analyse each effects scene as it pops up. The result is a satisfying VFX crib sheet that would sit nicely between your beer and pretzels next time you settle down to watch the movie. Now there’s a thought … 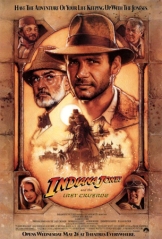 The structure works well for a film that’s relatively light on visual effects. Still, mechanical effects supervisor George Gibbs has plenty to say on the movie’s practical effects, notably those featured in the opening train sequence and later tank chase. Gags on the train included full-scale mechanical creatures such as a pair of giraffes whose necks are seen sticking out of a box car. Gibbs explains the novel way in which he and his fellow operators communicated with assistant director David Tomblin. ‘David would ask if the giraffes were ready,’ he says, ‘and the giraffes would shake their heads “yes” or “no” in response. It got to be pretty funny.’

Gibbs describes his replica Mark 7 army tank as ‘the most difficult effect I worked on for the movie.’ The tank was a solid-steel monster, built around the chassis of an excavator that weighed in at a staggering twenty-eight tons. For the scene involving the actors on top of the vehicle, a partial tank was built with rubber tracks and ‘”people catchers” on either end in the event anyone accidentally fell off.’

Visual effects were handled by Industrial Light & Magic, under the guidance of visual effects supervisor Mike McAlister. Flying scenes involving a zeppelin and biplane were shot under motion control using models in front of a bluescreen. For shots of a German fighter crashing through a tunnel in pursuit of Indy and Henry Jones (now driving a car they’ve, ahem, appropriated), additional techniques were added such as stop-motion animation (to make the miniature plane’s wings crumple) and a large-scale miniature of the tunnel, through which the car and burning fuselage were dragged at speeds approaching 30mph. All in all, a classic mix of 1980s techniques.

The bite-sized nature of this article makes it easy to pick out favourite moments. Pick a scene you like and there it is. I’ve always admired the trompe l’oeil illusion of the invisible bridge that prompts Indy to take his ‘leap of faith’ towards the end of the film. How did they do that? Mike McAlister and matte artist Mark Sullivan tell all.

McAlister also describes the one-shot decomposition of villain Walter Donavan from man to skeleton, which was achieved by blending together a series of motion-controlled puppet heads using the computer morfing technique developed for Willow. Not content to sit on their laurels, however, ILM took the morfing process a step further: whereas Willow had used traditional optical compositing to combine the various digitial elements, for Indy III they went all-digital. ‘As far as I know,’ says McAlister, ‘this is the first time anyone has ever accomplished this type of digital compositing for a full-screen, live-action image.’

Need I say more? Roughly one-third of the feature films covered by Cinefex during the 1980s feature contributions from the company George Lucas founded in 1975 to create the effects for Star Wars. During that decade, Industrial Light & Magic contributed to nine of the ten films that won Academy Awards for Best Visual Effects. It’s a hell of a run, and one that shows no signs of stopping yet.

As for Indiana Jones, has he stopped or not? ‘I don’t foresee there being another one,’ says George Lucas at the end of Eisenberg’s article. ‘I’ve run out of ideas.’ That was 1989, of course. A lot has changed since then. So it’s heartening to remember than, when Indy did eventually dust off his fedora to chase down a crystal skull in 2008, Cinefex was still around to tell us exactly how he did it.

The Ghostbusters II article is practically a backstage pass to ILM, with countless shots of puppets and miniatures both under construction and before the camera. Page 15 is my favourite, showing as it does several images of the Nunzio Scoleri animatronic. If you thought he looked scary in the film, you should see him with his skin off.

From the Indiana Jones and the Last Crusade article, I’m going to pick the spread of photographs showing how the memorable ‘invisible bridge’ was created. The pictures include a bluescreen element of Harrison Ford, shots of the miniature bridge being painted and photographed, and a pair of stills from the movie itself, showing the two extremes of the camera move that reveal the illusion.

And that’s me done

Well, that’s me sort of done. There really is a list of clearly identifiable visual effects trends that emerged during the 1980s. It’s a big list, far too big for this little blog. I’m going to scratch its surface in one final article called Cinefex through the 1980s, which I’ll be publishing in a week or two.

As for writing retrospectives, like George Lucas says at the end of Adam Eisenberg’s article on Indiana Jones and the Last Crusade, ‘I’ve had a great time … but now it’s time to move on.’

I hope you’ll stay tuned to this blog, however. As you’ll find out soon, I don’t plan to move very far …