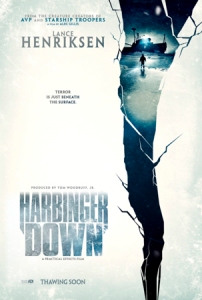 Huge congratulations to Alec Gillis, Tom Woodruff and the rest of the ADI team for raising the $350,000 they needed to make their feature-length sci-fi horror movie Harbinger Down. For a while it was touch and go whether or not they’d hit their Kickstarter target, but a steady groundswell of support from a big fanbase and bags of exposure through both traditional and social media got them there in the end.

According to the original video pitch, Harbinger Down will be packed to the rafters with monsters designed to “celebrate animatronics and makeup FX”. Sounds like fun, especially when you remember Gillis and Woodruff were behind the creatures in such classic movies as Aliens, Predator and Starship Troopers. Plus it’s going to star the legendary Lance Henrikson. What’s not to like?

But there’s a sub-text here. This isn’t just a Kickstart – it’s a kick out against the steady erosion of traditional special effects techniques by computer-generated imagery. Take the 2011 prequel to The Thing. “All of our work [on the movie] was either replaced or augmented by CGI,’ says Gillis in the Harbinger Down introductory video. “We were heartbroken.”

I don’t personally buy the whole “old-school effects are better than CG” argument. Visual effects is a constantly-evolving discipline. Those 1980s movies we look back on with such fondness were a product of the state-of-the-art of their time. Today’s visual effects industry is just as full of equally talented people using the very latest toolsets to create amazing imagery. Nothing’s changed and, really, we’ve never had it so good.

It would be a crime for the traditional skills to be lost. That’s why I’m delighted to have thrown a few of my British pounds at this production. As I watched the investment total slowly inch its way up, then stall, then finally skyrocket with incredible speed past the target at the eleventh hour, I found myself marvelling at the overwhelming passion and optimism presented by Gillis via his regular investor updates. The ADI guys aren’t just trying to secure their livelihood here (and should we knock them if they are?) – they’re doing something they truly love.

Here’s a final plea to everyone who’s passionate about traditional special effects techniques (and there are plenty of you, I know). Let’s stop thinking of them as “old-school” effects. Projects like Harbinger Down don’t have to be throwbacks or nostalgia trips. Approached properly, they can stand on their own two feet as viable 21st century propositions. Animatronics and makeup effects aren’t stuck in the 1980s – they’ve evolved along with everything else. I have no doubt those highly-evolved folk at ADI will be taking advantage of all the latest developments in materials technology as they craft their creatures for Harbinger Down. “State-of-the-art” is an inclusive concept, after all.

And, yes, I’ll admit it. They had me at “rubber monsters”.

(At the time of posting, there are still 4 hours left before the Kickstarter deadlines expires for Harbinger Down. The guys might have reached their target but every little extra helps. Go on, make a monster smile.)

3 thoughts on “Harbinger Down”