Rummaging through the attic, I came across this half-finished painting. I started it in 1983, but despite an initial youth-fueled burst of enthusiasm, never summoned the energy to complete the damn thing.

If you’re a movie buff or science fiction fan, you’ll see immediately that it’s a hodge-podge of ships and characters from popular films including Star Wars, Blade Runner, 2001: A Space Odyssey, oh, and many, many more. The idea was to grab all my favourites of the day, and crash them together in an imaginary spaceport setting.

As with its predecessor The Picture, this concept allowed me to create all kinds of amusing juxtapositions, like King Kong trying to climb aboard Jabba the Hutt’s sail barge, or Darth Vader queueing in line between snake-dancing replicant Zhora and Flash Gordon (strolling in black-and-white among his Technicolor companions). The giant departure boards promise trips to destinations ranging from Alderaan to Krypton, Golgafrincham to Riverworld. The night sky is crowded with flying vehicles fighting for airspace, from the USS Enterprise to the Discovery … and is that really an Arrakis sandworm rearing up in front of the Tyrell Corporation’s pyramid headquarters?

If I did ever take a paintbrush to The Picture Strikes Back again – an unlikely prospect – the hard part wouldn’t be picking up where I left off. Nor would it be correcting some of the distinctly dodgy figure work. It would be resisting the urge to add in all the memorable characters and funky pieces of sci-fi hardware that have popped up in the intervening years. Believe me, that’s a long list. No, I think my only solution would be to complete the painting as it stands – as a kind of nostalgic time capsule locked in a bygone age.

My biggest fear is, if I did finish it, I might then feel compelled to start a third piece of artwork, just to bring things bang up to date.

Return of the Picture, anyone? 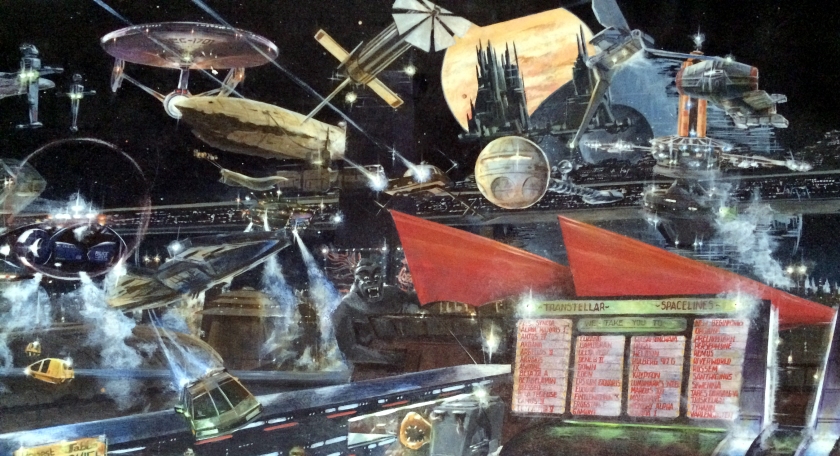